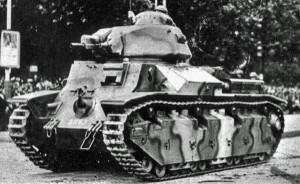 Developed in the early 1930s as insurance against the possible banning of a much heavier armor design by disarmament treaties under negotiation, 750 of the Renault D2 were initially ordered. When the treaty conference collapsed the D2 became less of a priority and only 100 were built between 1935 and 1940. Like all French tanks of the period the D2 was slow and had an inefficient one-man turret. The first 50 with a short-barreled 47mm SA34 cannon were assigned to the 507ème régiment de Chars de Combat in 1937. The regiment was based in Metz close to the Saar region of Germany where it trained in the use of tanks as a breakthrough weapon on the battlefield. The D2 had strong 40mm armor everywhere except the top and bottom of the hull. Along with its cannon the tank mounted two 7.5mm Châtellerault MAC 1931 machine-guns. The Renault V-6 engine moved the 19.4 ton tank to a maximum speed of 14 miles an hour. The D2 had a three-man crew