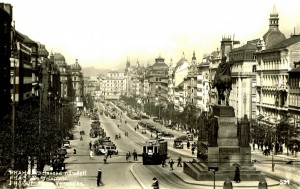 One of the most recognizable areas of Prague is Wenceslas Square (Václavské náměstí). Situated within the Nové Město (New Town) district of the city, the square dates back to the mid-14th Century and was the second largest market area until the late 19th Century. The square is 750 meters long with a statue of St. Wenceslas, the patron saint of the Czech lands, mounted on a horse at the southeastern entrance. The square is recognizable since it has long been a place where citizens in the capital assembled during critical times. In 1848 radical students and workers held a mass there against Austro-Hungarian rule that precipitated an uprising. Demonstrations for general voting rights took place in the square during 1905. In 1918 the proclamation establishing an independent Czechoslovakia was read before self-rule advocates at the statue of St. Wenceslas. When people flooded the streets in September 1938 to rally against capitulation to German demands it was Wenceslas Square where they headed to.