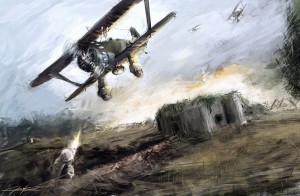 As soon as the Nazis came to power in 1933 an early priority was the re-establishment of an air force. One of the first requirements issued by the new Luftwaffe was for a dive bomber/ground attack aircraft. Henschel Flugzeugwerke A.G. won the contract with a design for an all-metal biplane. Very solidly built and capable of operating from primitive airfields, the Hs 129 was equipped with a BMW 132Dc 9-cylinder air-cooled engine that attained a top speed of 211 mph at 3,935 feet. Armament was two 7.92 mm MG 17 machine guns in the nose firing through the two-bladed metal propeller. The Hs 129 could carry one SC250 548-pound bomb under the fuselage and four SC50 110-pound bombs under the wings.  The 880hp engine managed a maximum range of 298 miles with a full bomb load. – Painting by Ondřej Soukup