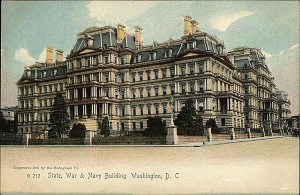 During the mid-1930s the home of the State Department of the United States was at State, War and Navy Building. The structure was built just west of the White House at 17th Street NW, between New York Avenue and Pennsylvania Avenue. Constructed in the French Second Empire style from 1871 to 1888, the building was designed for the War and Navy departments as well. Built of hand-hewn granite, the floors were laid with black slate and white marble squares, plus the interior benefited from huge skylights above the eight spiral staircases. By the time of the Sudetenland Crisis both the Navy and War departments had departed the building leaving the State Department as the sole occupant.