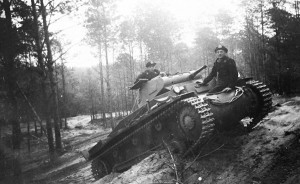 By the fall of 1938 the most numerous tanks in Wehrmacht service by far were light tanks such as the PzKpfw II. The main battle tank was supposed to be the Mark III, which had yet to enter service. The larger Mark IV was intended for infantry support and was available in small numbers. Early models of the PzKpfw II that were available against Czechoslovakia were designed with 14mm armor intended to withstand light infantry arms not anti-tank cannons. The main gun was a 20mm KwK 30 L/55 autocannon that used 10-round magazines but could fire 600 rounds per minute. There also was a 7.92mm Maschinengewehr 34 machine gun mounted in the turret. The six-cylinder Maybach HL 62 engine moved the 7.6 ton tank to a maximum speed of 25 miles an hour. The PzKpfw II had a three-man crew.