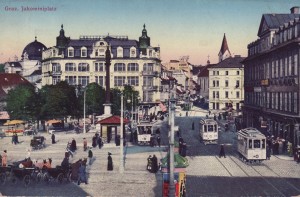 The Austrians have ruled Graz and the surrounding area since the 12th Century. The city is today the second largest in Austria. Situated in the southeastern portion of the country, Graz is the capital of the federal state of Styria. The city lies in a valley surrounded by mountains southeast of the Alps and straddles the Mur River. Since the community is shielded from northern air flows the temperature is warmer than most cities in the country with more sunshine and less rain. For these reasons Graz had already become a destination for retirees by the time railroads arrived in 1844, followed soon thereafter by industrialization. As the city grew more wealthy influential citizens began funding the construction of important institutions including universities such as Karl-Franzens-Universität where Johannes Kepler was a professor of mathematics, and Technische Universität Graz where Nikola Tesla studied electrical engineering for a while. At the time of the Sudeten Crisis, the national socialist movement was deeply rooted within the universities, prominent neighborhoods and the civll service in Graz.