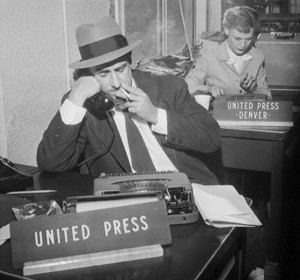 News services have been around since the 1850s as telegraph technology was introduced and enhanced. Especially in the United States during the latter half of the 19th Century, the growth of urban centers saw a huge demand for newspapers. Well into the 20th Century many large cities supported multiple morning and evening newspapers. All of these broadsheets and tabloids created an insatiable appetite for national and international news coverage that wire news services stepped up to serve. Thanks to the arrival of teletypewriter technology, wire service reporters working out of bureaus in key cities worldwide competed to get major stories covered and out to their subscribers first. Some services such as the Associated Press have their own reporters but are also collectives where member news organizations pool their coverage. Other organizations such as United Press, Reuters and International News were subscription based where news generated by the wire service correspondents were delivered to newspapers for a fee. With the advent of radio, and later television, the demand for more news from far-flung parts of the world continued to increase.