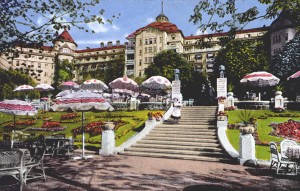 The Hotel Imperial was built to cater to wealthy patrons from across the world seeking the curative mineral waters found in Karlsbad (Karlovy Vary). At the time the hotel opened in 1912, 70,000 people were visiting the community every year. Constructed on the Helenin dvůr (Helenenhof) plateau above the city, two funicular railways were built through the hills to transport hotel guests between Karlsbad and the Imperial. In 1912 the hotel possessed over 300 rooms and salons with 100 spa rooms. Surrounding the Imperial were gardens and terraces occupying 35,000 square meters. The Hotel Imperial is still in operation today.