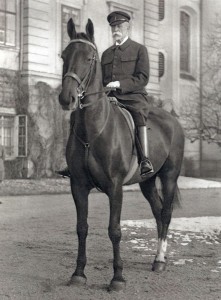 Czechoslovakia was a nation carved out of the Austro-Hungarian Empire in the aftermath of the First World War. Austria had been on the losing side of the conflict and included territories populated by a dizzying multitude of ethnic nationalities. In a speech for the U.S. Congress in January of 1918, President Woodrow Wilson had put forth Fourteen Points as aims for the Allies to conclude the war and achieve peace in the world thereafter. Point No. 10 was the call for all peoples living in Austria-Hungary to be accorded the freest opportunity to autonomous development. When Austria’s principal ally, Imperial Germany, determined that disaster on the battlefield was imminent, the Germans initiated negotiations in early October of that year to end the war based on Wilson’s Fourteen Points:

The Czechoslovak National Council had been organized in exile by Tomáš Maseryk, Milan Štefánik, and Edvard Beneš in 1916. By 1917, France and Great Britain had recognized the group as the legitimate voice of a future Czechoslovak state. At the end of October 1918 the Council proclaimed independence in Prague, and became the provisional government led by Maseryk. A month later a provisional National Assembly was formed. As a result of negotiations at the Paris Peace Conference in January 1919, the establishment of a Czechoslovak Republic that included the historic Bohemian Kingdom, Slovakia, and Ruthenia was agreed upon. The Czechoslovak Constitution was ratified in 1920 with Czech and Slovak as official languages. Ethnic minorities that made up 20% or more of the population in a district could use their own language in business, schools, and in dealing with government representatives. Maseryk was elected president that same year and served until he retired in 1935.

Czechoslovakia emerged as a nation of 13.5 million people that retained close to 80% of the industrial capacity of the Austro-Hungarian Empire. In addition to manufacturing, a growing chemical industry was also included. The industrial district of Tesin was claimed by both Czechoslovakia and the new independent Polish state. The area was divided between the two countries with the Polish half named Cieszyn.

A major complication for the Czechoslovaks was that more than 3 million of its citizens were ethnic Germans. Most of the new country’s light and heavy industry was operated and owned by Germans in Bohemia and controlled by German banks. Only 30% of the industry was owned by Czech interests.

These same Bohemian Germans had attempted to form a new German/Austrian state at the end of 1918 until Czech troops had moved in to take control of the border districts that had become known as the Sudetenland.