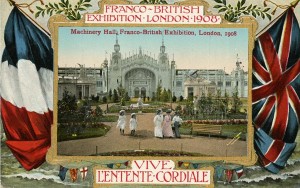 The “cordial understanding” was a declaration signed by France and Great Britain in 1904. After 1,000 years of often fierce competition both nations realized their interests had grown to become very complementary, especially in view of the rise of Imperial Germany. The Entente Cordiale was a settling of colonial disagreements in Africa, the Middle East and Asia. Both Great Britain and France acknowledged their respective holdings and agreed not to undermine the colonial authority of the other. The Entente Cordiale was neither a military or economic alliance between the two Empires. There were no stipulations binding one to the other. The Entente Cordiale was, however, an expression of joint interests that came to define the relationship between Paris and London. So while the Unite Kingdom was under no obligation to go to war with France if the latter came to blows with Germany in 1938, both governments felt it in their best interests to work together.