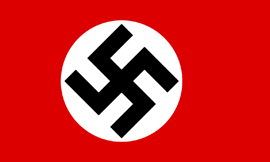 In many ways the war never ended for Einhardt Heiden in 1918. The young infantry officer was convalesing in a hospital when the armistice with the allies was signed. Released from service after his wounds had heeled, there were no jobs for common veterans like him so he joined up as a volunteer Freikorps kommando to put down the Polish uprisings in Upper Silesia during 1919. Preferring a conservative autocratic government to the Weimar Republic, the following year Heiden marched on Berlin in the failed Kapp Putsch. For the next 10 years he spent time with several shadowy paramilitary groups and flirted with a number of right-wing political parties, including the Nazis. It was Heiden’s misfortune that he sided with the Strasser Brothers who were competing with Adolph Hitler for control of the movement. He was eventually expelled from the party in 1930 as politically unreliable. Ottke was well known by other Freikorps veterans and by 1935 was recruited by Admiral Wilhelm Canaris to serve in Germany’s military intelligence division, the Abwehr. With his army commission reactivated, Heiden zealously returned to the shadows as a counter-intelligence operative.