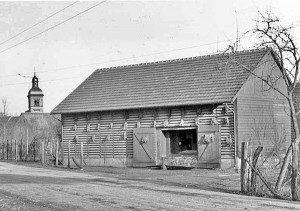 To block the main French invasion route through the Saar to the Rhine, Germany began construction of a fortification line in 1936 after reoccupying the Rhineland. Most of the early emplacements were built under the direction of the army along the Saar River opposite France’s Maginot Line. By early 1938, Chancellor Adolph Hitler grew impatient with the slow progress of construction and ordered the project taken over by Organization Todt, which had been building new highways on schedule all over Germany. With plans to extend what became known as the Westwall from the Swiss border to the Netherlands, Todt amassed 600,000 workers to construct 14,800 bunkers, 5,800 casemates for artillery, plus 2,300 pillboxes for machine guns and anti-tank guns. Unlike the French, there was not time to build these emplacements under ground, so use was made of above ground camouflage and subterfuge. Mass-produced fake barns (like the one pictured above) and village structures were placed at regular junctures along the line. In addition, huge bands of minefields, concrete dragons teeth and tank traps were sown. Despite the huge effort, by the fall of 1938 large swaths of the Westwall were incomplete, and the city of Saarbrücken was left outside of the line.