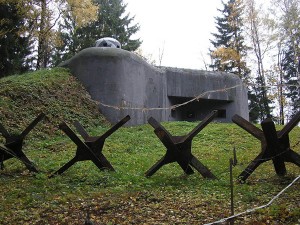 Soon after Czechoslovakia had gained independence it became obvious that the country had long borders to defend against many unfriendly neighbors. Germany, Poland and Hungary were all viewed with suspicion with only Romania considered to be friendly. When Adolph Hitler came to power in Germany during 1933 the government in Prague decided to ring its borders with defensive fortifications. The first stage of construction started in 1934, and had the intended program had gone on uninterrupted the fortification lines would not have been completed until the 1950s. The French shared their design blueprints for the Maginot Line, which the Czechs adapted and enhanced for their own needs: The end result was a system made up of light, medium and heavy forts. Light forts were pillboxes equipped with light machine guns only. Medium forts added 47mm anti-tank guns supplies to sustain 20 soldiers up to three weeks. The large artillery forts were huge affairs that were self-sufficient and interconnected blockhouses that had their own artillery, infantry, electricity, medical centers and kitchens. By September 1938 there were nearly 6,000 light and medium forts in Bohemia. In Northern Moravia there were 250 heavy plus 1,200 light and medium forts. Southern Moravia had six heavy installations as well as 1,000 light and medium forts. In Slovakia 11 heavy fortresses had been built along with 2,000 light and medium sites.